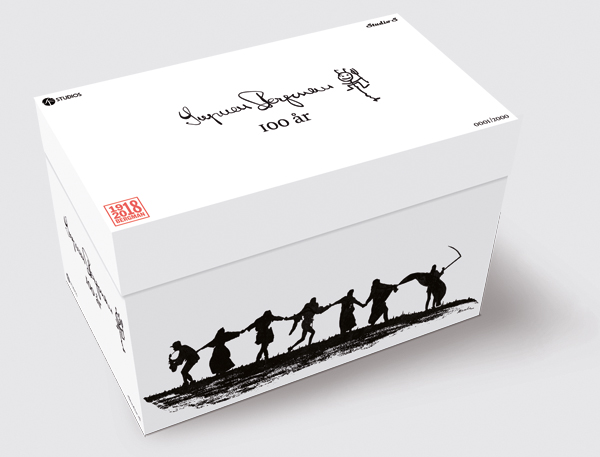 OVER 70 HOURS OF INGMAR BERGMAN IN ONE EXKLUSIVE AND LIMITED BOX-SET. LIMITED TO 2000 COPIES ONLY!

36 movies and a one TV-series directed by Ingmar Bergman, six films written by Ingmar Bergman for other directors as well as unique interviews both recent and archival, behind the scenes footage, commercials, trailers and more. All features and bonus material are subtitled in English (with the exception of the 6 films directed by others).

Four booklets (in swedish only) with detailed information about each films, newly written essays about different time periods in Bergman’s creation, unique quotes from his own archive and the original swedish posters for all titles.

Ingmar Bergman is by far our greatest director of all time, both in Sweden and internationally. To celebrate the masters 100th anniversary, Studio S is proud to present, as the first film company in the world, an almost complete collection of his cinematic masterpieces. From the praised ”Torment” which he wrote for Alf Sjöberg through internationally acclaimed works such as ”Wild Strawberries”, ”The Seventh Seal”, his first Academy Award rewarded ”The Virgin Spring”, the controvrersial ”The Silence”, ”Persona” and all the way up to ”Fanny and Alexander” which was awarded with four Academy Awards and which meant a grand finale on a film career that spanned for five decades.

A number of Bergman’s works makes their debut on DVD and the majority of the films released within this box-set are released for the first time with new digitally restored image quality.

* New digital transfer and digitally restored versions on the majority of the 42 movies. New 4K digital restoration on ”The Seventh Seal”.
* 14 introductions by director Ingmar Bergman (shoot 2001).
* 17 newly produced short interviews with Ingmar Bergman, shoot in 2001 by Marie Nyeröd.
* 9 vintage soap commercials by Ingmar Bergman.
* 5 vintage interviews with Ingmar Bergman from The Swedish Television archive.
* 2 of Bergman’s own behind the scenes documentaries from the making of “Autumn Sonata” and “From the Life of the Marionettes” examining every aspect of the production.
* Stig Björkmans movies “Ingmar Bergman” (1971) on the making of “The Touch” as well as “Images from the Playground” (2009) and “…But Film is My Mistress” featuring behind-the-scenes footage shot by Bergman, archival audio interviews with Bergman, and new interviews with actresses Bibi Andersson and Harriet Andersson among others.
* ”Monika: Story of a Bad Girl!”– the American Grindhouse-version of “Summer with Monika”.
* “Hour of the Wolf” meta-cinematic framing with prologue (about 7 minutes) and epilogue (about 1 minute).
* A handful of Swedish and American theatrical trailers.
* Everything, movies and bonus material, subtitled in English (with the exception of the 6 films directed by others).

We use cookies on our website to give you the most relevant experience by remembering your preferences and repeat visits. By clicking “Accept All”, you consent to the use of ALL the cookies. However, you may visit "Cookie Settings" to provide a controlled consent.
Cookie SettingsAccept All
Manage consent

This website uses cookies to improve your experience while you navigate through the website. Out of these, the cookies that are categorized as necessary are stored on your browser as they are essential for the working of basic functionalities of the website. We also use third-party cookies that help us analyze and understand how you use this website. These cookies will be stored in your browser only with your consent. You also have the option to opt-out of these cookies. But opting out of some of these cookies may affect your browsing experience.
Necessary Alltid aktiverad
Necessary cookies are absolutely essential for the website to function properly. These cookies ensure basic functionalities and security features of the website, anonymously.
Functional
Functional cookies help to perform certain functionalities like sharing the content of the website on social media platforms, collect feedbacks, and other third-party features.
Performance
Performance cookies are used to understand and analyze the key performance indexes of the website which helps in delivering a better user experience for the visitors.
Analytics
Analytical cookies are used to understand how visitors interact with the website. These cookies help provide information on metrics the number of visitors, bounce rate, traffic source, etc.
Advertisement
Advertisement cookies are used to provide visitors with relevant ads and marketing campaigns. These cookies track visitors across websites and collect information to provide customized ads.
Others
Other uncategorized cookies are those that are being analyzed and have not been classified into a category as yet.
SPARA OCH ACCEPTERA